Running a company can be thrilling and fulfilling. It can also be humbling and exhausting, especially when things aren’t going well.

You know those moments: When your team drops the news that the big release is going to be delayed by months– a week before you were supposed to launch. Or when your Head of Growth abruptly announces he’s leaving the company. Or when you and your team need to make a critical decision and the discussion is unproductive or awkward.

What you may not have realized in the midst of these communication gaps is that your team was sending you a message with their silence. They’re choosing not to tell you the truth at critical moments because they’re afraid you won’t listen to (or like) what they have to say.

It’s incredibly hard for a leader to spot that this is happening in their company. On the surface, folks may be agreeable and upbeat. You might even have the impression that they’re engaged and that everything’s on track.

But people’s thoughts and opinions are more often like an iceberg. There’s the information that they feel safe sharing with you; the stuff that you see above the surface. And then there’s everything that’s below. 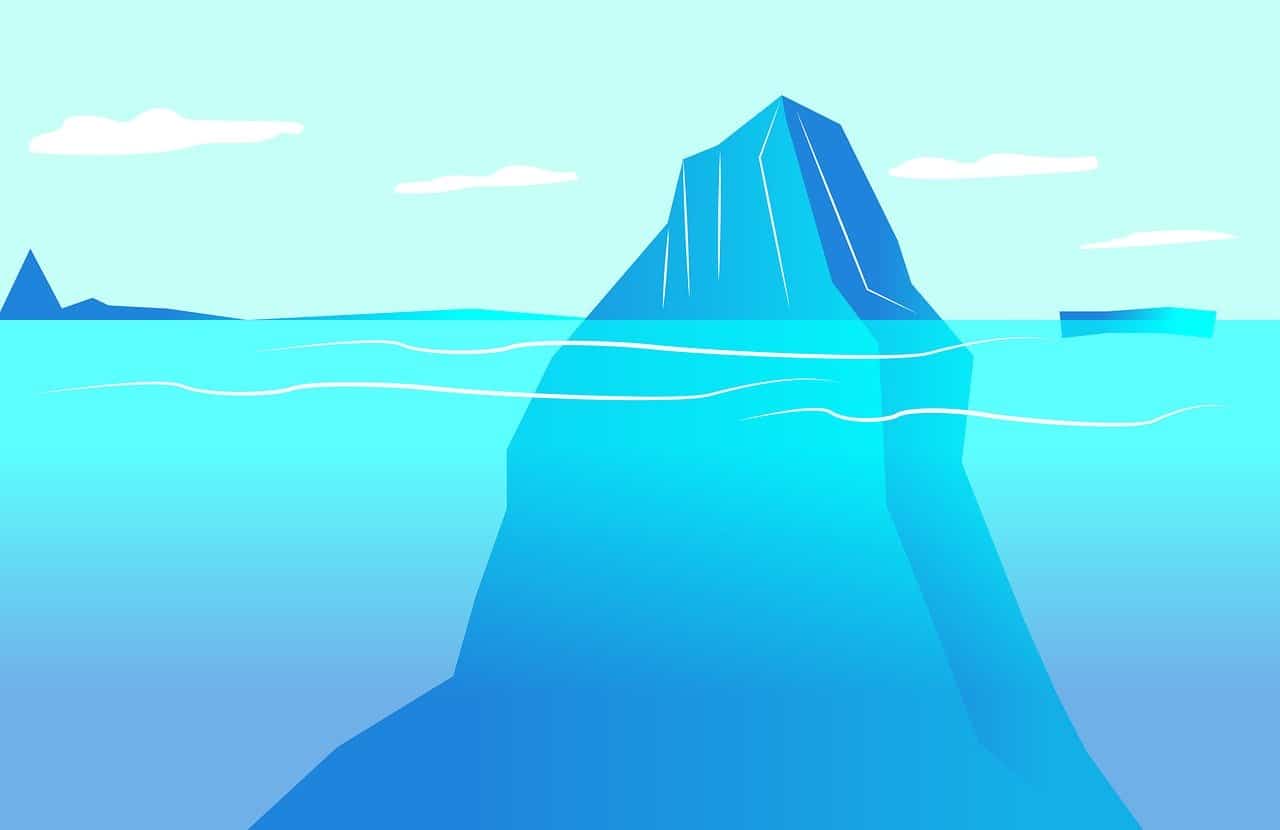 Too often what remains below the surface are essential truths like, “I know how critical it is that we release next week but our scope and timeline is severely out of whack”, or “I can’t be successful at this company because you micromanage my every move”. Or, “I’d rather deal with awkward silence than have you blow up over my opinion”.

After you get over your initial frustration, you might wonder: how did this happen?

It could have started when a critical decision needed to be made and people felt their opinions weren’t valued. Or maybe it was a series of less significant moments that added up over time; times when your team felt unheard, or where they witnessed others be subtly (or not-so-subtly) rejected.

Whatever the case, your team stored those experiences as instruction on how they should behave at your company. If employees believe that conflict and criticism can’t be worked through safely and constructively, or that there will be blowback for disagreeing, they’re more likely to keep differences of opinion below the surface.

This is a silent killer for a startup, where margins are thin and missed releases can’t be afforded. When leaders don’t listen, teams don’t perform to their potential. The impact to the bottom line, customer satisfaction and employee morale is obvious.

On top of that, you’re hiring people for their expertise and ideas. When folks feel like their value is being wasted, they’re  not likely to stay for long– starting with your best people.

Your mission is to create a culture that encourages as much information above the waterline as possible. And that starts with listening to your people, especially if you don’t like or agree with their opinion.

Below are several common watchouts that you need to avoid- and what to do instead.

#1 You Come Across as Defensive

Years ago my team and I were in the middle of a major software launch that required a ton of new configuration. It wasn’t going well because we were trying to retrofit our processes onto a platform that we were quickly learning wasn’t designed to do what we expected.

Day after day, my stress and frustration built as I tried to forcefit the app to meet our requirements. I felt myself regularly losing patience: with our vendor, my team and the new software that was less than it was promised to be. I was unhappy with any answer that didn’t align with what I wanted to hear. In retrospect, I was behaving like the worst version of myself.

Thankfully, a teammate I really trust and respect pulled me aside and candidly told me what I was doing to everyone around me. I was shocked to realize that she was right.

In the heat of the moment, I had no idea that my emotions were that obvious, or that I was killing the team’s morale. It definitely wasn’t the kind of leader I wanted to be. I got busy repairing relationships and becoming way more attuned to my behavior.

Thankfully, a sincere apology and having an understanding team can go a long way. I became much more aware of my actions and behavior, especially in heated moments. Ultimately, I was able to get through it and become a better leader for it.

It’s natural to be attached to our own ideas and decisions, especially when they’re what got us this far.

As a startup, you’re bringing new people onto the team with broader and deeper expertise. If you hired right, they’ll have their own opinions about how things should be done. They likely won’t appreciate the historical context for why writing the code on Ruby instead of Python was the best option at the time.

To your sensitive ears, their comments may sound naive or judgmental. The questions might even nag at some of your inner fears. This, in turn, can trigger defensiveness.

To avoid this, watch out for sarcasm, interrupting, or using a sharp or abrupt tone.

And your body language is just as important as your words. Pay attention to your facial expression and posture. Do you look as annoyed as you feel on the inside? Is your body tense or closed off?

Turn off your inner dialogue and seek to fully understand what your teammate is telling you, without judgment or reaction. Your body language is the most powerful way to show you’re paying attention and that you respect what the other person is saying. Stay open and just…  listen. Notice what they’re telling you, verbally and non-verbally.

After listening, ask probing questions before giving your own point of view. More information will deepen your understanding and prevent you from making assumptions. It’ll also give you time to formulate a more thoughtful response. “Help me understand what you mean by…” and “I’m curious about….” are great question starters.

I once had a client who was exceptionally gifted at getting the most out of her team. She knew how to harness the deep expertise of each person, and took the time to see each employee as an individual. Her people felt truly valued, and she protected them from all drama and distractions so they could do what they do best. It was one of the most technically high-performing teams I’ve worked with.

Her biggest weakness? When faced with a new problem or strategic decision to be made, she’d spend a small amount of time getting input and then quickly form an opinion. Once that happened, she refused to accept alternative ideas. And she really didn’t like when people tried to push that boundary. She never became angry or intimidating; instead she would just shut down and tune out.

Those unknowing or persistent souls who continued to press got shut out for good. People learned that they could only take it to her edge, but no further.

As effective as she was at running her team when things were routine, this habit made it extremely difficult when the team was faced with a new opportunity or unexpected issue. Her solutions were less innovative and creative as a result.

Your team is here because they believe in your company, and that they have the potential to make an impact, and they want to be part of something meaningful. Assume that their thoughts and opinions come from a place of positive intent and shared purpose, no matter how they express it.

Encourage your team to tell you the truth by intentionally seeking their opinion on hard questions. What’s not working here (and why)? What am I not thinking of? What’s the #1 thing that would make you want to leave this company? are some of my favorites.

#3 You Gravitate Toward People Who Agree With You

Many leaders fall into the subconscious trap of surrounding themselves with people who agree with them. It’s like confirmation bias, and it’s rooted in our desire to validate what we already believe to be true. It doesn’t matter what’s at stake, because the subconscious is driving the process.

What does it look like? When you’re trying to make a decision or get feedback from the team, you seek out the opinions of people who think like you do. You pay more attention to their comments, draw out their responses, ask more follow up questions. You make more direct eye contact with them, maybe even lean your body in their direction. They get more “air time” and your implicit approval.

In contrast, you hesitate to seek input from those who think differently. You rarely turn to them first when asking for an opinion. You may look away from them when they talk, or even make eye contact with someone else in the room to feel an alliance of sorts.

Since much of what’s being communicated is subtle and unspoken, it’s easy for the subtext to go unnoticed unless folks are specifically watching for it. Even if your team picks up on it, it’s challenging for them to confidently describe the behavior, unless it’s a longstanding or broadly recognized pattern. As such, it also tends to happen far more frequently than other “watchout” behaviors, so the impact can be even more damaging over the long term.

Intentionally hire and support people who are different than you

Deliberately pick team members who think about things differently than you do. Not only does it cultivate the open culture you’re striving for, but it’s been proven that adding racial, ethnic, and gender diversity leads to better outcomes.

Be 100% invested in their success

There’s nothing worse for your company, your culture (or the person) than to hire someone who thinks differently than you do, then be triggered by said qualities, and let them flounder (or fire them) because they turned out not to be a “fit”, or because they didn’t produce the results you expected because they were off on an island. As powerful as it can be for creating a culture of open communication, the negative impact of this person failing will leave a lasting mark on your culture. If you’re willing to take the leap and hire those who think differently than you, be prepared to double-down on the strategies above to make it a success.

The longer you practice these behaviors, the more natural they’ll become. And by doing so, you’ll have taken a huge step forward in creating the company culture you aspire to have. Where people are encouraged to share their opinions, where the best decisions get made, and where you also get the best possible results.

Ready to get started?

Tell me about your business needs & challenges. I’ll get right back to you.

Ready to get started?

Tell me about your business needs & challenges. I’ll get right back to you.